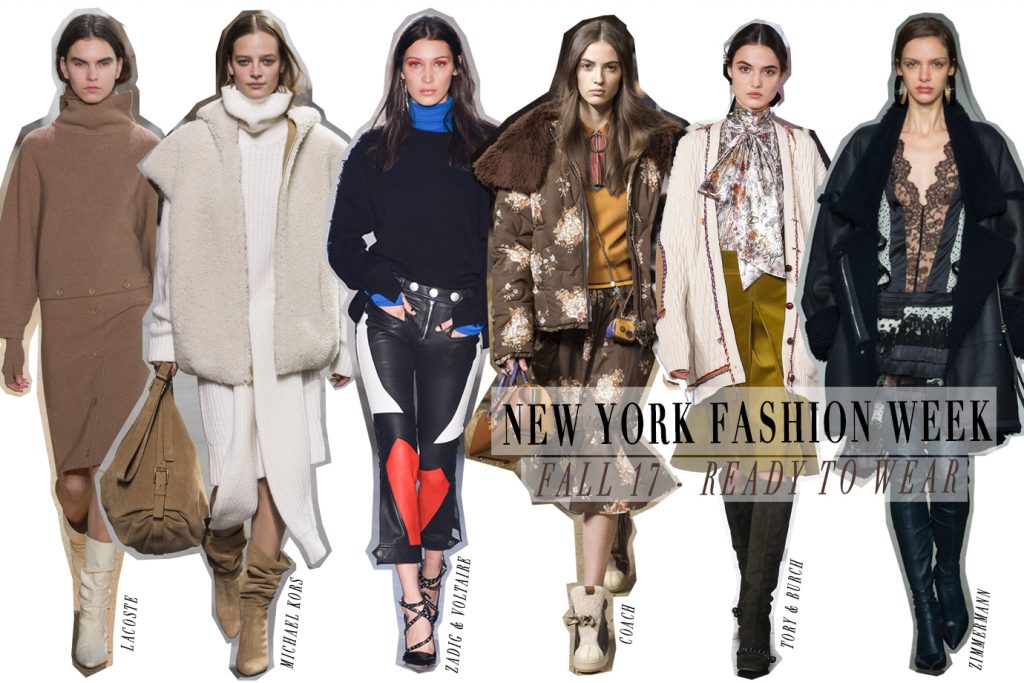 During fashion week there always are so many amazing shows, presentations and events that you could fill your calendar until it bursts. However, I made the experience that events and especially shows always take longer than planned because for once they tend to start delayed and often you want to stay for a while afterwards to chat with friends and take some pictures. Thus, I made the decision a while ago to – instead of rushing to every single event – concentrate on my absolute favorite shows! 🙂 You might have followed them on my Snapchat or Insta stories but in case you didn’t, I want to use this post to tell you about my favorite designers and my time in icy New York! I hope it leaves you feeling as inspired as I felt when the New York Fashion Week came to a close. 🙂 xx Leonie

As I have told you before, the Tory Burch show is always one of my favorites. Tory’s fall/winter collection was inspired by the Audrey Hepburn classic “The Philadelphia Story” and thus stood for strong but nonetheless feminine women – a contrast that fortunately is none anymore in today’s world. Fittingly, Tory played with color contrasts using a mixture of whites and blacks but softened her looks by adding warm golden colors, soft materials such as velvet and silk, and feminine details like bows and pearl buttons. All in all a most wonderful collection, don’t you think? You can read even more about it: here.

This year’s Lacoste collection goes back to the roots. Firstly, the roots of the brand and it’s founder Le Crocodile himself, René Lacoste, who also worked in the aircraft industry once he was done with sports. And secondly, the roots of the designer Felipe Oliveira Baptista, whose father was a pilot. And let’s be honest: who of us travel-addicts has not once dreamed of being a pilot oneself?! Accordingly, this seasons Lacoste collection is all about aviation and an intriguing mixture of high fashion and functionality inspired by – I am not kidding – the materials and stitches of astronauts’ suits! Curious? Let’s have a look! 🙂

In a time when the news are all about exclusion, Michael Kors put on a show all about inclusion and dedicated to all “the women who inspire him”. Thus, the collection was presented by models from all over the world and even including the whole range of dress sizes, while the designer stayed true to his look: feminine confidence, elegance and simplicity with a hit of extravagance. The idea was to create a collection that every woman could pick a piece from she identifies with, and I can say: I saw plenty that I wouldn’t mind seeing in my closet soon! 😉 How about you?

For their fall/winter collection Coach assembled and mixed some of the hottest trends of the season. When a cowboy meets a biker meets a college football player you get a look that is hard to beat in its attitude and coolness. Where would a look like that feel more at home than on the streets of New York – the city where you can be a little bit of everything. Coach put on the kind of show that you can’t look away from even for a second and I felt so full of inspiration and new ideas once the music stopped. Who are you: cowboy, biker, or team captain?

When I think about Zimmermann I think about light fabrics, joyful patterns, a warm Australian breeze dancing around my legs, about freedom! No matter how stressful a day I had, once I sat down at the Zimmermann show and the music started, I felt uplifted. The Zimmermann fall/winter collection was inspired by pictures of women in post WWI Melbourne and you can feel the atmosphere of awakening optimism, playfulness and the beginning of female empowerment in the pieces. This season’s show was about embracing being a woman while not being afraid of stealing out of your man’s closet. It’s about being elegant but not afraid to get your hands dirty and that is an attitude I love and that I can identify with! Isn’t that what fashion is all about?

This year the Parisian label turned 20 years old (Ahhh, to be twenty again… ;)) and for its birthday it treated itself to not one but two treats: its first New Yorker fashion show and Bella Hadid as the opening star. Skillfully the fall/winter collection combined the best of two worlds – the self-confident and effortless elegance of Parisian women with the slightly bad-ass, sporty and brave attitude of New York’s fashion industry. A successful step into a/the new world for the label!

You may also enjoy: